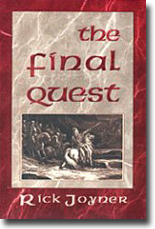 In my last post, I began a critique of Rick Joyner’s book, The Final Quest. Although this book has been out for over a decade, it’s still very popular and is continuing to bring people into the apostolic-prophetic movement. Also, many of the book’s erroneous teachings are taught in apostolic-prophetic churches.

In the introduction to The Final Quest, Joyner (pictured here) claims that modern prophetic revelations — like the vision contained in his book — can’t be used to establish doctrine (teaching). He says, “We have the Scriptures for that.” The two purposes of modern revelation, according to Joyner, are to reveal God’s will about certain matters and to illuminate doctrine that is taught in the Bible.

Yet — despite what Joyner says — his book contains many doctrines not found in Scripture or that contradict Scripture. In this post, I will look at a few examples of each.

Doctrines Not Found in Scripture
• Christians will be assigned to various levels of heaven. The Christians who served the Lord wholeheartedly, and with the right motives, will dwell in a level closer to Christ’s throne and will enjoy more of His presence, according to Joyner. They also will have more glorious bodies than the less devoted Christians. Those who didn’t serve Christ wholeheartedly will be assigned to the “outer fringes” of heaven for all eternity — far from Christ’s throne and presence. But, first, they will endure a hell-like experience — which lasts for what seems like a lifetime — until they repent of their lack of devotion to Christ. Only then will they be allowed to enjoy the lowest level of heaven. (See chapter 4 of The Final Quest for this teaching.)

Although the Bible does teach that there will be rewards given out in heaven, it doesn’t teach that there are different levels or that some Christians will have more glorious spiritual bodies than others. It also doesn’t teach that some Christians will have to go through a hell-like experience. Instead, the Bible teaches that heaven will be a place of eternal joy and intimacy with Christ for all God’s people. And it teaches that there will be no mourning in heaven because Jesus will wipe every tear from our eyes (Revelation 21:4).

• Last-days Christians must submit to modern-day prophets to have victory in the final battle (pages 58-59). They should be dependent on the prophets like children are dependent on their parents, according to Joyner (page 60).

Yet, the Bible doesn’t teach that Christians must submit to modern-day apostles and prophets. In fact, the apostle Paul warns the Galatian Christians about false teachers who want other Christians to seek after them (Galatians 4:17).

But nowhere does the Bible teach that angelic encounters are to become common or sought after.

Doctrines That Contradict Scripture
• Joyner teaches that marriages will continue in heaven (page 103), though Jesus taught that there will be no marriage in heaven (Matthew 22:29-30).

• Joyner teaches that Christians — during their earthly lives — can eat the fruit of the Tree of Life that was in the Garden of Eden (pages 35, 41-43), though the Bible teaches that we can’t eat of the Tree of Life until we go to heaven (Revelation 2:7; 22:2, 14, 19). In fact, after Adam and Eve were banished from the Garden, God put angelic guards around it to block access to the Tree of Life (Genesis 3:24). Yet, in Joyner’s vision, these angels allow Joyner to eat the tree’s fruit, which, according to Joyner, represents God’s love. Joyner said God told him:

This [fruit] is now your daily bread. It shall never be withheld from you. You may eat as much and as often as you like (page 35).

Seeking access to the Tree of Life — though forbidden by God until heaven — is a recurring doctrine in the apostolic-prophetic movement. I hope to address this teaching more in a future post.

All God’s people — since they’re all part of the bride of Christ — will take part in the wedding feast. No people in heaven will be left out of this festivity. Nor will any of God’s people “gnash their teeth in outer darkness” — as Joyner teaches — because this is a biblical description for hell. For more on this, see Hampton Keathley’s article, “The Outer Darkness: Heaven’s Suburb or Hell?”

I’m troubled that Joyner — someone who is considered an “apostle” and “prophet” — would be so careless with his handling of Scripture. The Bible warns that church teachers should be able to accurately handle the word of truth (2 Timothy 2:15).

Strange Doctrines
The apostle Paul told Timothy — the leader of the church of Ephesus — to “instruct certain men not to teach strange doctrines” (1 Timothy 1:3). Paul said these doctrines are based on “myths” and “mere speculation.” I think Paul’s command should be applied to many of Joyner’s doctrines.

There are other strange doctrines in Joyner’s Final Quest, which I plan to look at in future posts.

This entry was posted on Monday, April 16th, 2007 at 5:52 pm and is filed under False Prophets, Unbiblical Teachings. You can follow any responses to this entry through the RSS 2.0 feed. You can leave a response, or trackback from your own site.